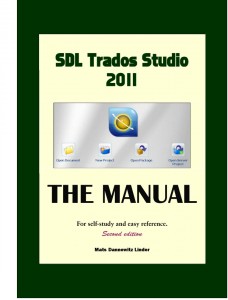 About a month ago, the new, third edition of the SDL Trados Studio 2011 Manual by Mats Linder was published. I thought it would be a great idea to read the book so I could check out the new features of Studio in comparison to the Studio 2009 version we currently use. To tell you the truth, in all my years of working as a translator and using TEnTs, I have relied almost exclusively on online help and (the past few years) social media for answers to any questions or problems that occurred. So, basically this was the first time I read a TEnT manual properly.

In the 374 pages of the book, almost every aspect of Trados 2011 is covered: the first 4 parts (Introduction, Basics, Quick guide and General Functions) act as an introduction to the tool itself, while the last 5 parts (Editing/Translations, Translation memories, Termbases, Automated translation and Regular expressions) focus on the many features of Studio 2011 that make it the industry’s leading CAT tool.

As I started reading the book, I was pleasantly surprised: at the preface, Mats promises that you can use the book without opening the program itself. As soon as I reached Chapter 1, this promise was indeed fulfilled: there is a huge amount of explanatory screenshots and these screenshots are ideal if you want to connect theory to practice straight away. You can virtually become an expert at using Studio 2011 without opening the program! This is also extremely helpful to new users who have no previous experience on SDL tools, mainly because you can familiarize yourself with the tool much faster than usual, just by having a look at the screenshots and the accompanying comments on the different available actions.

The other great thing about this book is that it is easier to use rather than searching Studio’s help topics. Don’t get me wrong: Studio’s help topics, both within the tool and online, are fine, but many times it is just easier to have all the info in one place, in a form of a manual, rather than browsing the help topics and going back and forth. The chapters are clearly organized; Mats offers a lot of information and tips, not only for the basic features of the program but also for more advanced situations (for example, autosuggest, pseudo-translation, handling legacy TMs, reversing language in TMs etc.). The reader can also benefit from other online resources that Mats mentions in the book (except from help at SDL’s TranslationZone, a number of other blogs on translation are mentioned). Overall, I think he covered all the bases.

One think I particularly liked were the shortcut annexes at the end: 27 pages with every shortcut the tool offers! The information in there is so vast, that I would recommend buying the book only for the annexes. You can save a great amount of time if you utilize at least a few basic shortcuts during your work, but these tables can make you much more efficient. The other thing that I really liked is the fact that this book is written by a translator for translators. This is a huge advantage for our profession, because most of the times the manuals offered by developers do not take into account the end users much. By being an end user himself, Mats connects with the reader on a different level and the book becomes much more valuable and useful.

Mats Linder included a P.S. at the end of the manual’s introduction: “What I really would like to write is a novel”. I wish him all the best in his future endeavors, but until he writes his novel, we’ll have his very detailed and well-written manual to keep us company in our professional life. Good job Mats and thank you!

Visit http://tradosstudiomanual.com/ to have a look and buy the Trados Studio 2011 Manual by Mats Linder.

Review of Audio Course ‘How to Make More Money as a Translator’
July 9, 2015

Book review: The Marketing Cookbook for Translators
February 16, 2015
Do you need English-Greek translations?