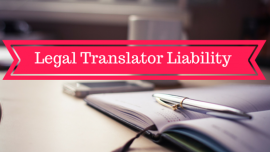 If you are a legal translator, then the following scenario should sound familiar. Your stressed-out lawyer client hires you on short notice to translate a complex legal document under a tight deadline. As the deadline approaches, you scurry to complete your proofreading while facing a barrage of e-mails and calls from your client’s neurotic legal assistant. You begin to surmise that several high-priced professionals, with their meters running, are waiting around for your work.

You manage to deliver the final product, but moments later get a nasty pit in your stomach. What if a mistake was missed in the translation? What if the client’s own client makes a costly, and incorrect, decision based on that mistake? Will you be held liable for all of the problems arising from that one error? Your anxiety will undoubtedly grow as you recall that the client is a lawyer, whose basic tool of the trade is also language and whose very livelihood probably consists of enforcing claims against people who make mistakes.

What follows will describe very broadly the general legal framework for translator liability in situations like the one I just described. It will also offer a brief explanation of how the law itself provides translators with some protection against such liability. Please note that this article does not purport to be, and should not be relied upon as, legal advice.

Any translator liability would be based on a theory of contract law and/or tort law, areas typically covered in the first semester of law school. A tort is a private or civil wrong arising from a violation of a legal duty recognized by law. It serves as the grounds for a lawsuit. The primary aim of tort law is to provide relief for the injury or damages caused by one person to another and to deter others from committing such harms.

The tricky contract issues here are: 1) at what point do translation mistakes constitute a breach of contract, and 2) if they do constitute a breach, can the translator be held liable for other damages that are the consequence of the translator’s mistake? These issues and the answers to them are very similar to the issues and answers raised in actions based on tort law and are examined later in this article.

A translator’s liability under tort law (specifically the concept of negligence) will also be based on a breach of duty, but this duty is one not imposed by a contract, but instead one imposed “by law.” In a translation context, if the translator fails to perform (“breaches”) a duty of care, which under the law he or she owes to any person who could be expected to rely on the translation, and such breach causes an injury to that person directly, then the injured person (claimant) may demand that the translator compensate him or her for any injuries sustained. The claimant will generally seek to be put in the same position that he or she would have been in had the translator not breached the duty of care.

In our legal translation scenario at the beginning of this article, either the translator’s lawyer client or that lawyer’s own client would most likely claim that the mistake in the translation led to a wrong action or decision, which in turn led to a measurable loss. Most of the facts (“elements”) that the claimant would need to prove under a negligence case against the translator could be established. These are:

The main issues under a negligence theory relate to the second and third elements described above and are not dissimilar to the aforementioned issues under a contract law theory. Did the translator actually breach the duty of care owed to the claimant? Did that breach actually and directly cause the injury of which the claimant complains?

“Once More unto the Breach”

The common issue under both legal theories is whether or not the translator actually breached a duty of care (contractual or legal). Unfortunately (or perhaps fortunately) for translators, translation contracts typically offer little guidance on when a contractual duty is breached (contract law). Also, case law and the translation profession are largely silent on when a translator’s standard of care is breached (tort law).

Most translation “contracts” contain nothing more than a price and delivery date. I have seen thousands of translation contracts over 20 years in the business and have never once seen an attempt by a client or translator to set translation performance criteria. If translation contracts specifically quantified how many translation mistakes would be tolerated (e.g., minimum number of omissions, inaccuracies, typos, semantic inconsistencies, etc.), then the translator’s minimum duty (and potential for liability) would be much easier to identify.

The courts have also not provided much guidance on what legal standards might apply to translations. Based on my own legal research, as of September 2013, there has not been a single contract or tort case establishing standards for translator liability ever reported in the U.S. (see endnote 1). Thus, there is no legal precedent on translator liability that a claimant or court could follow.

If a court were faced with a translation liability case, however, it would look to industry standards as a benchmark in determining the duty of care. Yet, while standards for the translation industry exist at the international level (e.g., ISO 12616, Translation-Oriented Terminography), supranational level (e.g., European: EN 15038, Quality Standard for Translation Services), and national level (U.S.: ASTM F2575.06, Standard Guide for Quality Assurance in Translation), they vary in scope and purpose and often raise more questions than they answer. For instance, are these standards considered “best practices,” “preferred practices,” or “basic minimum requirements?” How recognized and generally accepted are they? In a court case, a claimant would need to establish which standards apply and prove that they were actually violated by the translator.

The Law Itself as a Shield to Legal Translator Liability

While contracts, case law, and industry standards offer little guidance in determining whether a mistake in a legal translation can qualify as a breach of contractual duty or duty of care (thereby triggering liability), translators should take comfort in knowing that these same laws yield excellent defenses for shielding translators from liability.

As suggested earlier, any person claiming to have incurred a loss due to a poor translation must meet the burden of proving that the translator breached his or her duty. This task will not be easy because there is no legal precedent or industry consensus about the professional standards that help define that duty. This increases the costs and difficulty in bringing a lawsuit.

Any mildly competent lawyer will understand that the task of legal translation is virtually impossible. The ideal legal translator must be absolutely fluent in the source and target languages and must possess a deep understanding of the source and target laws and the differences between them. Recognizing also the complexity of legal writing (e.g., convoluted sentence structure, abstractions, proclivity for passive voice, and archaic language), the immense breadth of the law and its specialty areas, the continuing debate on source text fidelity, and the hard deadlines confronted by lawyers and legal translators, it seems surprising that anyone would be qualified or naive enough to handle these types of translation alone. A collaboration between the translator and the lawyer—indeed a team of lawyers— is really the only way to produce a truly competent legal translation.

Furthermore, the role that legal translation plays in lawyer-client communication obscures the requisite causal link between a legal translator’s mistake and a client’s loss. This is because there is developing law that seems to place the lawyer between the legal translator and the lawyer’s client. This argument follows the logic of recent articles from legal scholars (see endnote 2) and judicial opinions (see endnote 3) addressing attorneys’ potential malpractice liability for so-called “legal process outsourcing” (LPO). These articles and decisions reveal how lawyers can be held accountable for client losses caused by independent contractors to whom the lawyers outsourced “non-delegable” law-related work, which their clients had good reason to believe was being handled or at least closely managed by the lawyers themselves.

Therefore, it stands to reason that the translation of legal documents that routinely contain information, upon which the lawyer’s client will rely when making a decision that will determine that client’s legal rights and duties, is the kind of LPO work that needs to be monitored very closely by the lawyer. If the lawyer does not review a translation performed by a legal translator, then the lawyer is likely exposing himself or herself to malpractice liability and would certainly break the “chain of causation” between the translator’s mistake and the client’s loss.

The Law as a Safeguard

These legal defenses certainly do not absolve translators from exercising professional care and judgment in performing their translation work, which begins by knowing what they can and cannot handle. There are also numerous other proactive steps that legal translators can take to shield themselves from liability (e.g., use established quality assurance routines, incorporate the business, embed exculpatory clauses and disclaimers into cover letters, etc.). A survey of such additional steps is beyond the scope of this short article. Legal translators should breathe a bit easier, however, knowing that the law itself has some built-in liability safeguards as they meet the challenge of translating legal documents for potentially litigious clients.

This article was originally published in The ATA Chronicle (August 2014), the monthly magazine of the American Translators Association (www.atanet.org). 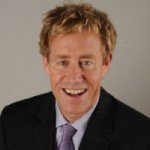 Thomas B. Mann is an attorney who practiced international business law with a corporate law firm in Chicago in the late 1980s/early 1990s. He has a JD from American University and a Masters of Law degree (LLM) from the Universität Heidelberg in Germany. Since 1993, he has served as managing director of the specialist legal translation firm TransLegal Deutschland GmbH in Germany, and as president of U.S.-based TransLegal Inc. He is also vice-president of the Stockholm-based TransLegal Group, which provides legal English services and resources for the global legal community. Contact: mann@translegal.com.