A Mixed Metaphor Walks into a Bar… 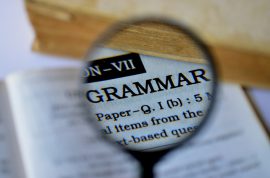 All of us know that English is the most inconsistent, confusing, and maddening tongue on the planet. Unlike most other languages, it is often called a “bastard” language because of its multifarious etymological and philological foundations.

English, as we know, is a combination of Latin, Germanic, French, Saxon, Gallic, and Nordic tongues—to mention just a few. And while it belongs to the Indo-European family of languages, its grammatical rules are often bewildering and paradoxical—especially to non-English speakers who are learning the language. 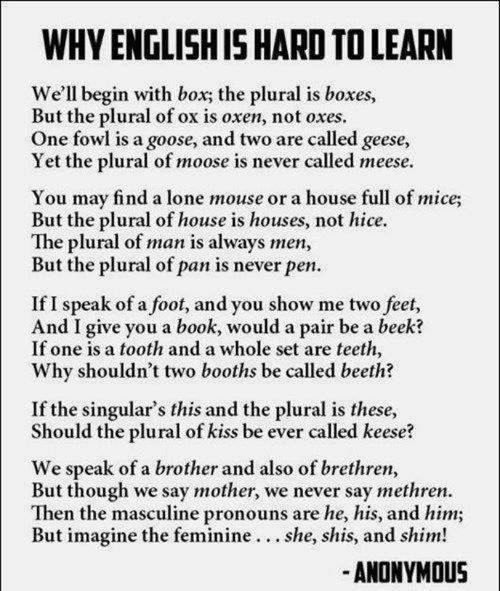 Recently somebody sent me some interesting examples of English grammar in action and I thought to myself, ‘this is a great way to teach the idiosyncrasies and eccentricities of English grammar.’ Take a look and enjoy. You might even learn something.

A malapropism walks into a bar, looking for all intensive purposes like a wolf in cheap clothing, muttering epitaphs and casting dispersions on his magnificent other, who takes him for granite.

A dangling participle walks into a bar. Enjoying a cocktail and chatting with the bartender, the evening passes pleasantly.

A bar was walked into by the passive voice.

An oxymoron walked into a bar, and the silence was deafening.

Hyperbole totally rips into this insane bar and absolutely destroys everything.

An Onomatopoeia screeches into a bar, sizzles, growls, and roars.

A question mark walks into a bar?

A non-sequitur walks into a bar. In a strong wind, even turkeys can fly.

Papyrus and Comic Sans walk into a bar. The bartender says, “Get out — we don’t serve your type.”

A mixed metaphor walks into a bar, seeing the handwriting on the wall but hoping to nip it in the bud.

A comma splice walks into a bar, it has a drink and then leaves.

Three intransitive verbs walk into a bar. They sit. They converse. They depart.

A synonym strolls into a tavern.

At the end of the day, a cliché walks into a bar — fresh as a daisy, cute as a button, and sharp as a tack.

A run-on sentence walks into a bar it starts flirting. With a cute little sentence fragment.

A figure of speech literally walks into a bar and ends up getting figuratively hammered.

An allusion walks into a bar, despite the fact that alcohol is its Achilles heel.

The subjunctive would have walked into a bar, had it only known.

A misplaced modifier walks into a bar owned a man with a glass eye named Ralph.

The past, present, and future walked into a bar. It was tense.

A dyslexic walks into a bra.

A verb walks into a bar, sees a beautiful noun, and suggests they conjugate. The noun declines.

An Oxford comma walks into a bar, where it spends the evening watching the television getting drunk and smoking cigars.

A simile walks into a bar, as parched as a desert.

A gerund and an infinitive walk into a bar, drinking to forget.

Reblogged from Ronald E. Yates’ blog, with permission by the author

Translation favorites (Mar 2-15)From headlines to website copy: Use formulas and templates to promote your services

The State of Languages in the U.S.
November 8, 2017
Do you need English-Greek translations?