Literary Translation Meets the New Media: What Comes Next? 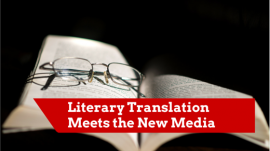 Translated works represent about 3% of the U.S. publishing market. But e-books, print-on-demand publishers, and self-published authors eager to expand their international readership have given literary translators a wider range of potential projects and publishing platforms from which to choose.

What effect will these have on literary translation in the 21st century? Our experts weigh in with some predictions.

Tony Beckwith: A writer and literary translator in Austin, Texas

Recent statistics for the U.S. publishing market indicate totals of almost 350,000 titles a year. Based on that figure, and on the 3% share referred to in this month’s question, roughly 10,000 translated works will be published in the U.S. in 2013.

Given the context of this column, the following article is of enormous interest: “Publishing Market Shows Steady Title Growth in 2011 Fueled Largely by Self-Publishing Sector”. The article was released by Bowker, a leading provider of bibliographic information services, in connection with the results of its annual report on U.S. print book publishing for 2011, compiled from the company’s Books In Print database.

Conventional publishing houses— which, until recently, were the sole option for aspiring literary translators seeking to publish their work in book form—are certainly a portal to that goal, but are also a barrier (sometimes an impenetrable one). There are several reasons for this. Some publishing houses are perfectly reasonable, considering that book publishers, like any other business, must be successful in order to survive. Therefore, editors have been cautious, and their caution has often been exacerbated by the fact that many are unable to read in a foreign language.

But then the 20th century introduced the Internet and made us all publishers. The democratizing effect of the resulting “new media” has given every literary translator the tools to bypass the traditional publishing world and publish one’s own work. Inevitably, this will create a flood of translated literature made available to anyone with access to an electronic device of some kind. Some translators believe that the American reading public is not adventurous enough to appreciate foreign literature, but surely this cannot be true when we recall the popularity of works like 100 Years of Solitude, Tintin, and, more recently, The Girl with the Dragon Tattoo, among many others. No, the market is there; the status quo has merely created an artificial bottleneck. It will surely be tapped more deeply than ever by those who learn how to use the new tools at their disposal, just as self-published writers have done to achieve the growth mentioned above.

In the 21st century, translators will have to reinvent themselves. When we drop the final syllable of “new media,” we are left with a “new me.” Literary translators will have to take on many of the roles traditionally assumed by conventional publishers and become their own talent scouts, editors, copy editors, designers, publicists, marketing specialists, legal advisers, and so on. Will everyone be up to wearing so many hats? That remains to be seen. For those who are not, we can assume that a whole new cadre of experts will be lining up to support them in their online ventures, creating new hierarchies that may one day prove to be just as powerful as the publishing houses they would like to replace.

These are exciting times for book translators because technology is facilitating a shift in the publishing paradigm. In a traditional scenario, literary scouts look for interesting books in a foreign language so that publishers can go through the process of acquiring rights and having them translated for the national market.

However, historically, we have seen that only a few U.S. publishers are actually willing to publish translations, unless world-renowned foreign authors can bring a solid following after receiving major literary awards in their own language. Today, with a variety of self-publishing platforms available to authors— such as Lulu and CreateSpace for print-on-demand paperbacks and Amazon’s Kin dle Direct Publishing or Smashwords for electronic formats— there are so many doors being opened to authors and translators alike.

There are successful cases, such as that of Hugh Howey, whose self-published Wool series became so big that his agent landed him several translation deals with foreign publishers even before he signed with Simon & Schuster to have his book available in paperback in the United States. The math is simple. More books being published means more potential work for translators, who can now tap into the market by partnering with independent authors who wish to expand their readership, crossing language and cultural borders to offer their work to non-English speakers.

Now that the filter of publishers and literary scouts is not a mandatory path anymore, we, the translators, can be in direct contact with content creators, which brings a whole new dimension to the work we do. Additionally, we can now take ownership of content available in the public domain. Authors have been doing it already, taking on classics such as Jane Austen’s Pride and Prejudice and adding zombies to the mix for a fun final product. So, why not bring classic works from one language to another instead of waiting for a publisher to wake up and smell the coffee?

These are tumultuous times for the publishing industry. Though the changes are radical and consequently a bit unsettling, they do present many opportunities for literary translators. The barrier to entry is already weakening. With the rise of digital and self-publishing, literary translators no longer have to knock on publishing house doors.

We are free to find fascinating projects, contact authors, and pursue alternate routes. Easier access to publishing means more translations on physical and virtual shelves. As the audience for our work grows, the stigma that translated works are somehow “beyond” the average reader will diminish. Payment models are changing, too. Agreements with publishers have traditionally been fee-based, with the possibility of 1-3% royalties. Arrangements with authors, however, are trending toward a 20-50% profit share, with a smaller or no up-front fee. Translators could earn more under such a model if a work sells well.

More importantly, though, such a split recognizes the proportionate value of our work. Overall, this new publishing scenario requires an entrepreneurial spirit. Rather than an x-per-word job awarded by an editor and a publisher who handle everything from printing to promotion, our role is becoming much more involved. Like original language authors, we need to assume a certain amount of risk and invest in editing, layout, design, and marketing, with the expectation of future reward.

For those who favor the current print model, traditional publishing will remain a viable, if limited, option. Publishers are adapting to keep pace with global industry changes, and literary translators may be able to capitalize on this transition. Now is the time to advocate for more translations in e-book format because of lower production costs. And, like authors, translators need to start negotiating for more equitable royalty agreements.

This article was originally published in The ATA Chronicle (July 2013), the monthly magazine of the American Translators Association (www.atanet.org).