Languages: our existential core, yet sadly the constant source of unwarranted conflicts 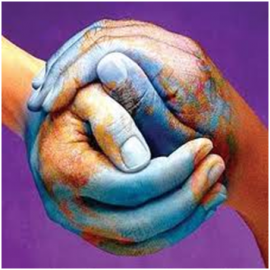 “Language is the light of the mind”- John Stuart Mill

With over 6000 languages spoken across the globe, languages are undoubtedly the most important part of our being; they form an integral part of our identity. In addition to being fascinating storehouses of knowledge and heritage passed down from generation to generation in the form of legends, myths, fables, folklore and so on, they also serve as the best channels to understand and explore the nuances of different cultures and traditions. New words are invented over time and old words acquire changed meanings rendering a dynamic touch to the world of languages. Yet, we allow ourselves to squabble over languages and use them as a pretext to keep us apart.

A glimpse into our past

Probably the earliest recorded conflict in the history of human existence that speaks of a so-called “Us” and “them” divide between cultures is when the Greeks coined the derogatory term “Barbarian” to label all those who spoke a foreign language, to imply that they were uncivilized and savage unlike the Greeks themselves. The word originates from “Barbaros”, meaning “those who babble”, since they spoke in a language incomprehensible to the Greeks. After the Romans conquered Greece and established the vast Roman Empire, the term was used for Germans, Celts, Persians, Carthaginians, Iberians and surprisingly enough, the Greeks themselves! Back then of course, concepts like “rationalism” and “humanism” were unheard of, so one cannot blame them completely for giving in to the innate human tendency of seeking familiarity and rejecting what is beyond understanding. If you ask me, what is really sad is that over the centuries, we haven’t learnt from our past. Languages are so closely engrained in our core existence that anything we perceive unfamiliar becomes an immediate source of discomfort.

Time for some serious self-introspection

Despite all our holistic advancements in science, technology, education and so on, a part of us deep inside continues to behave like the Greeks and Romans did, which is evident all across the world even today. Being from India, let me start with a couple of examples from my own country where anti-Hindi agitations sparked off riots in  the state of Tamil Nadu in 1965, anti-Urdu riots resulted in over 25 deaths in Bangalore in 1994, and anti-Hindi agitations prevail in the state of Maharashtra till date, to mention a few. Since long, Linguistic apartheid between Dutch speakers and French speakers has been prevailing in Belgium, seeping through all spheres of public and private life. The question of according Russian the status of a regional language in Ukraine, for the benefit of the Russian speakers, has been a cause of heated debates across the country. China has banned newspapers, website owners as well as publishers from using foreign (specifically English) words. As per the US Equal Employment Opportunity Commission, language conflicts in the workplace have doubled since 1997 in the United States. In 1999, the ban on the Kurdish Language by the Turkish Government led to the Kurdish revolt in Turkey. Gabriel Scottt’s satire “Tower of Babel” was based on a linguistic conflict in a small eastern Norway town wherein opposing linguistic groups kill each other over what to call their country. The play was so intense that there was a brawl in the audience during its premiere at Oslo in 1911, which haunts Norwegian politics till date. I can go on and on, but my intent is definitely not to list down all such conflicts (which in any case is quite impossible).

What I want to convey is that in today’s age of globalization, when the entire world is at our disposal at the click of a mouse, we need to get past our primeval instincts (however remote they may be) and perceive languages not as barriers or sources of conflict, but as precious channels to learn and appreciate people and cultures across boundaries. The initiative has to come from each one of us, and that in itself will succeed in transforming our world into a much more beautiful place than what it is today.

Himanshu Saxena is the Internet Marketing Specialist at TIIT Solutions, – and also writes for one of the top Translation Agencies in India . He has passion for writing unusual topics. You can catch up with him especially at Twitter, @himanshusaxena

How To Boost Your Foreign Language Speaking Skills Through Writing
November 20, 2017

2 thoughts on “Languages: our existential core, yet sadly the constant source of unwarranted conflicts”