Zingword: a new CAT tool and philosophy for translators

For starters, thanks to Lingua Greca for the opportunity to guest post. They’re awesome at what they do, for sure!

Zingword is a new CAT tool for translators and agencies that will come out sometime in 2015. Our plan is that it will be free. You can sign up for the CAT Tool launch notification already. We’re also looking for translators who are interested in testing Zingword prototypes. It’s an opportunity to influence a new software and get involved in the Zingword universe.

This article discusses our inspiration for the User Interface of Zingword. We’re not ready to release screenshots of Zingword, though we’ll start releasing them when we’re closer to the launch date.

Less is more: translating in Zingword

When we began analyzing CAT Tools, what we found was that there were simply too many customizations. Thus, the translation industry has become “the industry of splitting hairs.” Our goal is to identify the best way to do each task, and then do it rather than making the user do it. A good example is matching algorithms in the legal translation industry. It’s a common thing to tweak your matches manually in the settings for OCR documents where the memory is from source documents. But why not just have a checkbox for OCR?

Another good example is handling the two column and tags interface. Most tools give you tons of options, like copying the source text over, copying only the tags over, copying the tags over one at a time, doing side-by-side or over-under layouts etc. What people don’t realize is that the more options you offer, the more crowded and intimidating your tool becomes. The Zingword goal is to test different options with real translators to try to determine what is the most efficient way, and then implementing that one way.

Studies show that walking through doorways makes you forget things. So what happens when we navigate from page to page in a translation tool, or open up big pop-out windows?

Single page philosophy means simply that when a user interacts with something on the page, it stays on the same page. It’s less traumatic that way. Users are less likely to forget what they’re doing, and require less concentration to use the tool. There are many good examples of this, including gmail, but the one we’d like to mention is Red Booth (formerly known as Teambox). Red Booth is an online tool for project management. They recently changed their interface and improved it, but it used to look like this: 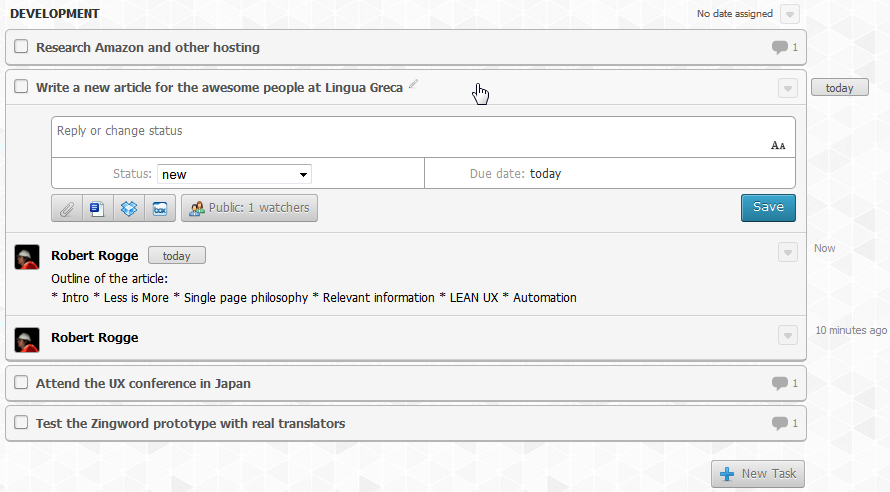 Wrike is another project management tool that we really like. One of the things that we like about it is that it always seems to display what we want to see depending on what we’re doing. For example, if you select one task, you see the date, who the task is assigned to, any comments made on the task, and anything else you want to know.

When you select two or more tasks, you see something very different. Wrike assumes that you want to do something to all the tasks selected, so it shows you all the things you can do to the tasks. Think about the tools you normally use for translation. You’d probably have to right-click, right? Right-clicking uses up precious translator brain power that could be used for something better, like translating or coming up with puns.

There is still a great deal of space for automation in the translation industry. When we talk about automation, we’re usually talking about translation management, sending notifications, and kicking off jobs. A good example of deeper automation is the new Gmail inbox. If you’re not familiar with that, the Gmail inbox automatically sorts your mail into Inbox, Social, and Promotions.

In the translation industry, a good example of that would be automatically and intelligently applying the translation memory so that managing memories becomes something automated rather than a constant source of concentration. Or recognizing the type and difficulty of a document based on the terminology found within it.

These are some of the innovations that we think are lacking in the translation industry in terms of usability, and we’re betting that translators are going to love our product. 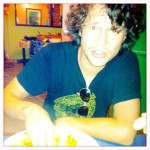 Robert Rogge, CEO of Zingword, is from Minnesota, in the United States. After living for seven years in Barcelona and co-founding Ricaris, the multilingual services agency with the old webpage that serves some of the largest web companies in Spain, he decided to travel South East Asia and take his work on the road. Managing Ricaris from a mobile internet connection in the middle of the bush proved a great idea, and from that sweaty paradise the idea for Zingword came about. Currently, Robert is working on the Zingword project and preparing to setup shop in Zagreb, Croatia. Twitter: @robertwrogge, @zingword About me: http://about.me/robertwrogge Linkedin: es.linkedin.com/in/robertrogge/