The history of translation: from tribal trading to company memos 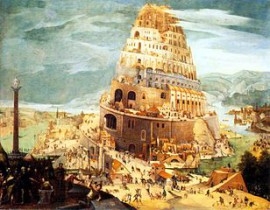 We modern translators often have extremely high-tech working lives, full of emails, CAT tools and video conferencing, not to mention our fair share of those most modern working conditions: stress and caffeine! We are truly at the cutting edge of a dynamic and global industry. But did you ever wonder where it all started? Who were the first translators, and how did we get to where we are today? It’s time for a trip back into the mists of time for a visit to our translator ancestors to discover what we have in common, and what’s changed.

The very roots of the word ‘translation’ itself get to the heart of what translators do. The term derives from the Latin phrase ‘to carry across’, and is similar to the earlier ancient Greek term that still persists in various forms in other European languages, ‘metaphrasis’ or ‘to speak across’. Both of these terms imply some kind of a gulf or gap between languages which must be bridged, and so it seems fair to assume that as long as people have spoken different languages, translators have been needed whenever they met, perhaps to trade, marry or go to war.

The first concrete evidence we have of translation is in conjunction with writing, which evolved in ancient Mesopotamia around 3200 BCE when clay tablets were used for simple administrative purposes like keeping count of bags of wheat. Our first example of a written translation followed around 1,200 years later, when the fantastic Sumerian epic poem ‘Gilgamesh’ was rendered into other south-west Asian languages. This gripping tale of the friendship between a mighty king and a wild man is seen by scholars as the first great work of literature, so it’s no surprise that it was a candidate for early translation.

Entertainment and practical communication were just two driving forces behind early translation however. Religion was one of the major engines for cross-language communication for hundreds of years. The first known translation team was a group of 70 learned Jewish scholars, who rendered a collection of scriptures known as the Septuagint into Greek sometime between the 3rd and 1st centuries BCE. More famous still (at least by translators’ standards!) were the medieval scribes diligently translating Latin, Greek, Arabic and other vernacular languages in the great monasteries of Europe. Umberto Eco’s gripping mystery ‘The Name of the Rose’, set in the shadowy monastery of Melk, is a must-read for anyone interested in the roots of the translation industry.

Geoffrey Chaucer was one of the first writers to translate foreign literature into vernacular English, setting the stage for one of the richest literary traditions in the world. Shakespeare too took inspiration from tales from far-off lands, weaving them into masterpieces of theatre. These early writers took plenty of creative liberties with their source texts, but it wasn’t until the Victorian era that literal translation and scrupulous accuracy came to be valued as they are today.

In the 20th century, academia first turned its attentions to translation, which fitted with the growing interest in humanities such as sociology, linguistics, psychology and anthropology. This intense critical attention, coupled with the technological advances and globalisation of business in the late 20th century completely revolutionised translation. Now teams of translators work for companies based all over the world using resources our ancestors could never have dreamed of, where information is available at the click of a button and a project can be assigned in Mumbai at breakfast and returned to New York by lunch.

There are over 7,000 languages spoken worldwide today, but the same things keep bringing us together: trade, personal relationships, entertainment, ideologies and learning. As long as we humans want to communicate in these important fields it looks like translation – and translators – are here to stay. Oleg Semerikov is an English, Russian and Ukrainian translator. Eight years ago he founded Translators Family, a friendly team of translators, editors, DTP managers and other specialists. Recently he opened the same-name translation services company in Poland in order to have an office in the EU and expand his linguistic business. Follow Oleg Semerikov and Translators Family on social media: LinkedIn, Facebook, Twitter, Google+

One thought on “The history of translation: from tribal trading to company memos”