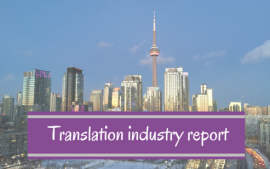 In 2012, the Government of Canada’s Translation Bureau commissioned PricewaterhouseCoopers to conduct a benchmarking and comparative analysis. This study obtained feedback from clients, the translation industry and the Canadian public to provide information on the Canadian industry’s capacity to meet national and government demand for translation. It also touched on benchmarks for good practices in linguistic services.

The analysis includes information related to challenges and emerging trends in the translation industry.

The language services industry is a global concern, with over 25,000 Language Service Providers (LSPs) in 152 countries.

The translation industry is spread out over the following countries, each with more than 500 LSPs: Canada, the United States, Western and Northern Europe, China, India and Japan. The market is highly fragmented, with the top 50 LSPs generating US$4 billion of the US$31 billion market.

63.4% of LSPs expect to remain independent and grow organically. While 18% of LSPs would like to make one or more acquisitions in the near or mid-term, 50.9% are open to business combinations (mergers and acquisitions) that would consolidate them in the marketplace. The LSP market is growing at an annual rate of 7.41%. The Translation Software market is anticipated to reach US$3 billion by 2017.

Internationally, the majority of LSPs have small employee bases:

Approximately 57% of LSPs have been in business for five years or less, while only 6.4% have more than 20 years of experience. Many LSPs are micro-enterprises with 78.4% run by their founding owner.

Canada is a leader in the translation market. With only 0.5% of the global population, it represents approximately 10% of the US$31 billion global market. This reflects Canada’s official language status. Approximately 90% of translation in Canada is between French and English.

Canada’s rising diversity is increasing the demand for languages other than French and English. Both globally and in the Canadian market, demand for less common languages is mounting and will continue to drive growth.

Based on data from 2010-2011, the Canadian Translation Bureau’s productivity ratio was approximately 250 words/hour. This is on the lower-middle end of the scale as compared to the organizations interviewed that ranged from 195–333 words/hour.

Many organizations that were interviewed for the survey stated that technolinguistic tool use was optional and at the translator’s discretion. This is mainly because of cultural resistance by translation professionals to use these tools. They are seen as further automating and commodifying a service that language professionals generally see as a creative exercise.

Quality assurance often relies on the translator’s skill, rather than being a separate function within the process. With some exceptions (certified or legal documents), quality is not considered as important to clients as cost or speed. More importantly, quality is expected by clients and therefore not considered a differentiator.

The history of translation: from tribal trading to company memos
March 17, 2015