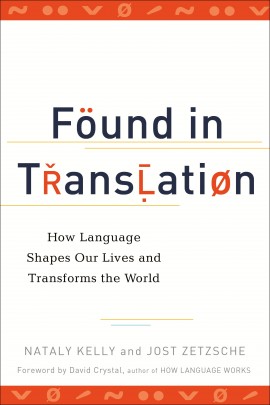 Nataly Kelly and Jost Zetzsche are the authors of the long-awaited and best marketed book of 2012, Found in Translation: How Language Shapes Our Lives and Transforms the World. I’m delighted to publish my interview with Nataly and share her insights into our exciting world of translation.

Tell us a little bit about how you developed an interest in languages.

I grew up in the tiny rural town of Mason City, Illinois – population 2,500. My interest in languages really started as a child thanks to my dear piano teacher, Helen Kim, who was from Korea.  I took voice lessons from her, and she taught me to sing Italian art songs, and eventually I began singing classical songs in French and German too. Unfortunately for me, but perhaps fortunately for the people attending my recitals, I never tried to sing in Korean!

When I was 12, I began learning Spanish. The first day of class, I took home my textbook and read the entire thing from cover to cover. I called up a friend and asked her if she wanted to practice Spanish with me. Her reaction was, “Are you crazy? That’s homework!” But to me, it was never homework. I loved it from the very start. My teacher was not a native speaker — her name was Señora Betzelberger — but she was excellent! By the time I finished high school, I was fluent in Spanish, mostly because I spent all my free time listening to music in Spanish, reading books and magazines in Spanish, writing letters to pen pals in other countries in Spanish, and talking with native speakers at every chance I could get. In other words, a total nerd. I also made friends with exchange students from Ecuador, which is what led me to eventually go live there.

I started college with a dual major in Spanish and Music Composition. My advisor for Spanish encouraged me to go study abroad. So, I went to Ecuador, and I took most of my general education courses, like economics, statistics, and so on, at a university there, all in Spanish. While I was there, I studied every language that was available to me – Japanese, Italian, German, French, and Arabic. I was in linguistic nirvana! Of course, I only developed a surface knowledge of those other languages, because I was studying most of them simultaneously. Still, I loved every minute of it!  So much in fact, that I dropped the music major to focus exclusively on languages.

How did you get into the world of interpreting?

While I was in Ecuador, I was tapped by a professor to interpret for a petroleum conference. I had no training whatsoever in interpreting, and was way out of my league. They had not given me any of the technical terminology in advance, and I quickly realized that I did not know most of the terms in either language! Also, since there was no simultaneous equipment, they wanted me to interpret the entire presentation in consecutive mode.  It was an absolute disaster, but a truly humbling moment, to realize how much more there was to interpreting than what I had ever known up until that point. I was only 19 years old, and certainly should not have been interpreting at such a high-level conference at that point in my career! It was daunting.  Interpreting can be scary, and what I learned then remains true even now: to be an interpreter takes a certain amount of bravery in addition to preparation.

The day after I graduated from college, I started working as a telephone interpreter with AT&T Language Line. I will never forget one of the terms on the interpreting skills test that tripped me up – hardware store. I knew the word when it was spoken in Spanish, but could not find the right term in English at that exact moment. I think I ended up paraphrasing, but it was one of those moments that you kick yourself for not having the perfect word at the right time when you know it is there in your head! While at AT&T, I also became certified as a court interpreter, passing the state consortium test. As a telephone interpreter, you take every type of call under the sun, but my favorite calls were medical calls and 911 emergency calls, where you truly feel that you make a difference in people’s lives.

Have you ever worked as a translator?

Yes, like many interpreters, when I was a freelancer, I supported myself through a mixture of written translation work (Spanish into English) and interpreting. During that time, I built up a stable base of clients, both direct clients and translation agencies. Because I am a court-certified interpreter, many clients began sending me legal texts to translate and edit. Some people might find them dry and boring, but I really loved them. Translating legalese is like translating a language within a language, so it’s challenging but fun. I also used CAT tools, and did the occasional software string localization project or technical manual, but I was never as passionate about those kinds of projects. I certainly respect all the translators with the patience to do them!

Today, I don’t do any paid translation work, because I am focused exclusively on research. However, whenever I find the time, I translate poetry. There is a poet from Ecuador named María Clara Sharupi Jua. She is an amazing woman from the Shuar indigenous group in the Amazon. She writes poetry in Spanish and Shuar, her mother tongue, and I translate it into English. So far, we have published several of her poems. It was always a dream of mine to translate Ecuadorian poets, but unfortunately, most of the ones whose work was widely published were dead Caucasian men, usually from privileged backgrounds. To me, they did not reflect the “real Ecuador” and the rich cultural tapestry of the majority of Ecuadorians that I knew. I wanted to translate the work of someone whose voice needed to be heard, someone whose voice might not otherwise ever be represented in the English-speaking world. That’s when I began searching for a contemporary poet, and found María Clara. She refers to me not as her translator, but as her “hada,” which is Spanish for “fairy.” Even her nickname for me is poetic!

To be continued…
Visit our blog next Thursday (October 11) to read the second part of Nataly’s interview. 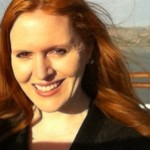 Nataly Kelly is an advisor in the areas of language services and international business. She is the Chief Research Officer at Common Sense Advisory, an independent market research firm dedicated to language services and technology, located in the Boston area. A former Fulbright scholar in Ecuador, she is a certified Spanish court interpreter.

She is the author of Telephone Interpreting: A Comprehensive Guide to the Profession, a book about over-the-phone interpretation, and frequently contributes to academic publications. Find her on Twitter as @natalykelly.

7 thoughts on “Found in Translation: Interview with Nataly Kelly, part 1”