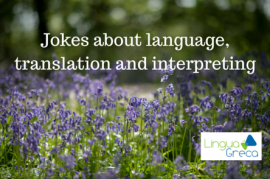 Following the funny mistranslations and crazy things PMs have said posts we published recently, it’s time for one more article to lighten up your busy day (and don’t forget; the weekend is almost here!).

I always wondered if there were jokes about translators, interpreters and linguists in general. Turns out there are quite a few and they are good! I had only heard a few of the ones mentioned below, the rest I discovered during my research for this post.

Do you know any other jokes about translators or interpreters? Please share in the Comments below and have a lovely weekend 🙂

Two translators on a ship are talking.
“Can you swim?” asks one.
“No” says the other, “but I can shout for help in nine languages.”

Two highway workers were busy working at a construction site when a big car with diplomatic license plates pulled up.
“Parlez-vous français?” the driver asks them. The two workers just stared.
“Sprechen Sie Deutsch?” The two continued to stare at him.
“Fala português?” Neither worker said anything.
“Parlate Italiano?” Still no response.
Finally, the man drives off in disgust.
One worker turned to the other and said, “Gee, maybe we should learn a foreign language…”
“What for? That guy knew four of them and what good did it do him?”

A Spanish speaking bandit held up a bank in Tucson. The sheriff and his deputy chased him. When they captured him, and the sheriff, who couldn’t speak Spanish, asked him where he’d hidden the money. “No sé nada,” he replied.
The sheriff put a gun to the bandit’s head and said to his bi-lingual deputy: “Tell him that if he doesn’t tell us where the money is right now, I’ll blow his brains out.”
Upon receiving the translation, the bandit became very animated. “¡Ya me acuerdo! Tienen que caminar tres cuadras hasta ese gran arbol: allí está el dinero.”
The sheriff leaned forward. “Yeah? Well..?”
The deputy replied: “He says he wants to die like a man.”

A mouse is in his mouse hole and he wants to go out to get something to eat, but he’s afraid there might be a big cat outside, so he puts his ear by the opening and all he hears is “Bow Wow” so he thinks, “Well, there can’t be a cat out there because there’s a big old dog”, so he goes out of his mouse hole and is promptly caught and eaten by a cat, who licks his lips and says “It’s good to be bilingual !!”

“I’ve just had the most awful time,” said a boy to his friends. “First I got angina pectoris, then arteriosclerosis. Just as I was recovering, I got psoriasis. They gave me hypodermics, and to top it all, tonsillitis was followed by appendectomy.”
“Wow! How did you pull through?” sympathized his friends.
“I don’t know,” the boy replied. “Toughest spelling test I ever had.”

The linguist’s husband walked in and caught his wife sleeping with a young co-ed. He said, “Why, Susan, I’m surprised.”
She bolted upright, pointed her finger and corrected him, “No. I am surprised. You are astonished.”

A former secretary of commerce liked to tell how a high ranking official once responded to a subordinate’s request for a raise by saying, “Because of the fluctuational predisposition of your position’s productive capacity as juxtaposed to governmental statistics, it would be momentarily injudicious to advocate an incremental increase.”
The staff person said, “I don’t get it.”
The official said, “That’s right.”

How does a freelancer define “weekend”?
Two working days till Monday.

A cat is sitting on the throne, and two dogs, an envoy and his interpreter, are standing before him. The interpreter dog is whispering to the envoy dog, “You’ll have to rephrase that. Their language doesn’t have a word for ‘fetch'”.

Q: How many translators does it take to change a lightbulb?
A: Depends on the context …

An English professor complained to the pet shop proprietor, “The parrot I purchased uses improper language.”
“I’m surprised,” said the owner. “I’ve never taught that bird to swear.”
“Oh, it isn’t that,” explained the professor. “But yesterday I heard him split an infinitive.”

A linguistics professor was lecturing his class the other day. “In English,” he said, “a double negative forms a positive. However, in some languages, such as Russian, a double negative remains a negative. But there isn’t a single language, not one, in which a double positive can express a negative.”
A voice from the back of the room retorted, “Yeah, right.”

A linguist walks in to a doctor’s office and says “Doctor, I have a rash around my mouth”. After close inspection, the doctor says “hmm, looks to me like it’s perioral dermatitis,” to which the linguist replies “yeah, that’s what I said.”

A teacher asked a particularly dull, lazy and objectionable pupil if he was ignorant or apathetic. The pupil replied: “I don’t know, and I don’t care!”